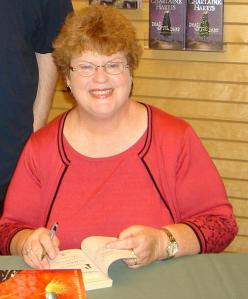 The keynote speaker at this year’s DFW Writers’ Convention was Charlaine Harris, the New York Times bestselling author most known for her Sookie Stackhouse novels (which subsequently became the True Blood TV phenomenon).

She just absolutely adorable.
Ms. Harris seems like everything I’d like in the sweet neighbor next door: a grandma who bakes cookies on the regular but also is more than willing to slip you a bottle of booze after a hard day. She was sharp and funny and seemed so lovely; I wish I’d gotten to speak to her personally. At the very least, I’ve bought the first novel in her series as a tribute!
Ms. Harris gave a short speech about her life’s work before opening the floor to questions. She talked about how difficult it was to write as a parent (“I wanted to have kids, but I just had to write. You make it work.”), about where her ideas come from (“I don’t know. They’re just there!”), and on the tenacity it takes to be a writer.
But the part that stuck with me most were her comments on her success. She said, “I still haven’t read On Writing or any other writing book, because I’m too afraid I’ll find out I’ve been doing it wrong all this time.”
Wow.
This woman has published a passel of books, literally just laughed when asked if an agent ever said she couldn’t do something, and yet still has that crippling fear of “doing it wrong.” It’s comforting to know that insecurity doesn’t have to be a barrier; it’s just something you work with and through.
She also said there’s an award she’d like to win…but fully expects never to be able to. She’s so accomplished in many ways—she’s the writer dream achieved!—but she still has goals she feels are unattainable.
And finally, she talked about failure, about how you just have to take it and barrel on anyway. She said she’s been dropped by publishers before…but you just can’t let that stop you. Having kids while writing was hard…but you can’t let that stop you. Your book may not sell…but you can’t let that stop you.
It was very powerful to me to “meet” this unassuming, very inspiring, dogged determined, funny lady who happens to be a literary powerhouse. I hope to have her tenacity and humor.
Which authors inspire you? How do you get through the insecurity and the bad days?