Is “This is America” the Modern “Invisible Man”?

There was one black boy in my elementary school. His parents came, at the invitation of my kindly first-grade teacher (who was also black), and taught us about Kwanza. It seemed marvelous; they had full costumes, the lighting of candles, eating of special foods, and there were stories. The whole thing seemed magical, and I was deeply impressed with my classmate, and that he got to participate in this incredible celebration.

Later, we had a visiting storyteller come by and tell us Anansi stories. The storyteller also wore the colorful South African-inspired clothes and had black skin, and that was fascinating, but I was focused on Anansi. She invited class involvement, and I was picked to play Tiger, a role I took deeply seriously. Tiger was strong, and fierce, and angry, but Anansi was clever, and trapped Tiger in a hole. This storytelling lesson inspired me to read many more Anansi stories as I got older, too. Anansi was clever, if not always kind, and he was an inspiration, how smart could beat strong.

While my school, over time, was minority-majority, there were very few black people; the main minority in my area was Hispanic. I learned about Crispus Attucks, Harriet Tubman, Martin Luther King, Jr., read Uncle Tom’s Cabin and Huckleberry Finn and was troubled that these people, locked tight up in history books, resigned to the past, had been hurt, but proud that they had struggled and won, had finally been proven how right they were. The history was done; it was written down, final. Black people were free. I didn’t need to worry about it anymore.

I grew up thinking we were in a truly post-racial society; racism didn’t happen to me, or in my range of vision, so that meant it was done and gone.

I shake my head at my naiveite now. It’s embarrassing that I ever believed the world was so pure, that I was so insulated that I didn’t know I was insulated.

The scales of privilege didn’t start to fall from my eyes until I read Invisible Man by Harlan Ellison in high school. It shook me, deeply. I was very troubled that this man would be treated so unjustly in so many ways, again and again, based on the color of his skin. But still I didn’t connect that it was not just a history book, that it was a fact of life for real people living at that very moment. I asked my reading group, “What can we do? How can we, as people, fix this?”

I wanted to patch things up, tuck it nicely back into the history books. My classmate said, “I don’t think we can. All we can do is try.”

So, all that is to say: I know I’m not the audience for Childish Gambino’s This is America. I’ve seen some commentary that white people shouldn’t try to dissect and comment on the music video but “listen and learn.” And maybe that is true. I am trying, do try, to listen and learn. I admit my privilege and my shortcomings, but I also can’t help but react to the music video. It’s powerful, and it resonates. And all I can do is try.

Maybe the first reason Childish Gambino’s music video reminds me of Harlan Ellison’s novel is because it shook me the same way. Neither experience—reading the book or watching the video—feels good. In fact, it’s revolting; I want to draw away from it. But at the same time, it echoes in my mind long after I’ve interacted with it. There’s an inherent push-pull, where I want to swim in the content more, but also hate how it makes me feel, hate the mirror it holds to the world.

Second, both are steeped with symbolism. Buzzfeed tries to break down some of it; even Forbes has chimed in with the dance-move call-outs. It all happens so fast it’s impossible to take in in one viewing.

But I haven’t seen anyone, yet, say that the music video has parts of Invisible Man in it.

Go read the book (or at least the plot summary). There’s too much for me to break down briefly, but the basics: It’s a symbolic, unusually-styled book about an unnamed black man and the many (many) ways he is abused by society, both writ large and personally. It is both subtle and not in its use of symbolism (the narrator, at one point, works for a company that sells white paint… paint so white it will get anything white – the way it’s meant to be, it’s implied).

At the time of first reading, I had to ask a teacher about the dancing Sambo doll in Invisible Man. From context, I knew it was racist somehow and some kind of mockery, but I didn’t know the cultural weight of it. Sambo was a word for a person of mixed (black plus anything else) ancestry. It’s a name that shows up all over the place for black characters and African Americans as a whole. 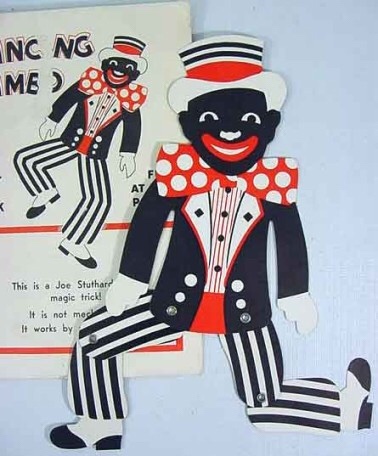 But the Sambo doll had more layers. The doll pranced and jived and looked happy for all the (white) children and doll-purchasers. It is based entirely on stereotypes and yet is seemingly innocent fun. It was the entire minstrel movement shrunk down and commoditized; you, too, children, can play with a Sambo of your very own! (The package instruction–“easy to work!”–also strikes me as insidious double-messaging.)

In the book, it’s repulsive that a black former activist has resorted to selling these racist dolls—it’s a repudiation of his prior interaction with the narrator and a meta-commentary on society as a whole. It makes the reader question: is the seller mocking the white people, for being so stupid as to think Sambo is a reflection of reality? Is the seller mocking the other blacks, for their participation in the system? Is he just out for money by playing on stereotypes? Has he betrayed the other blacks he used to work with?

Which gets me back to Childish Gambino: is he a living Sambo doll in the music video?

He dances with jerky movements (like a puppet doll might). He distracts the (white?) audience from all the chaos going on behind him. He smiles and japes like a minstrel act, while representing something deeper and more tragic. “Look at these great dance moves,” Gambino seems to say, “you don’t need to care about anything else. This is the only kind of black person you want to see, audience, so here I am, performing my tricks for you. You are so stupid you won’t see anything else.”

Are Gambino, and the dancing school children with him, a reflection of the commoditization of black bodies, black culture, the way the Sambo dolls are in the book? Is Donald Glover/Childish Gambino the rich sellout Sambo-dancing his way to the American public, tricking us white idiots into swallowing the message we don’t want to see?

Invisible Man ends with the character on the run, chased by both one of his black former friends and an angry crowd. The book ends in darkness, counterbalancing the electric lights of the beginning. This is America ends similarly, the fear etched in Childish Gambino’s eyes as the people who ignored him, looked past him, didn’t see him, finally do—and want to kill him for it.

4 responses to “Is “This is America” the Modern “Invisible Man”?”